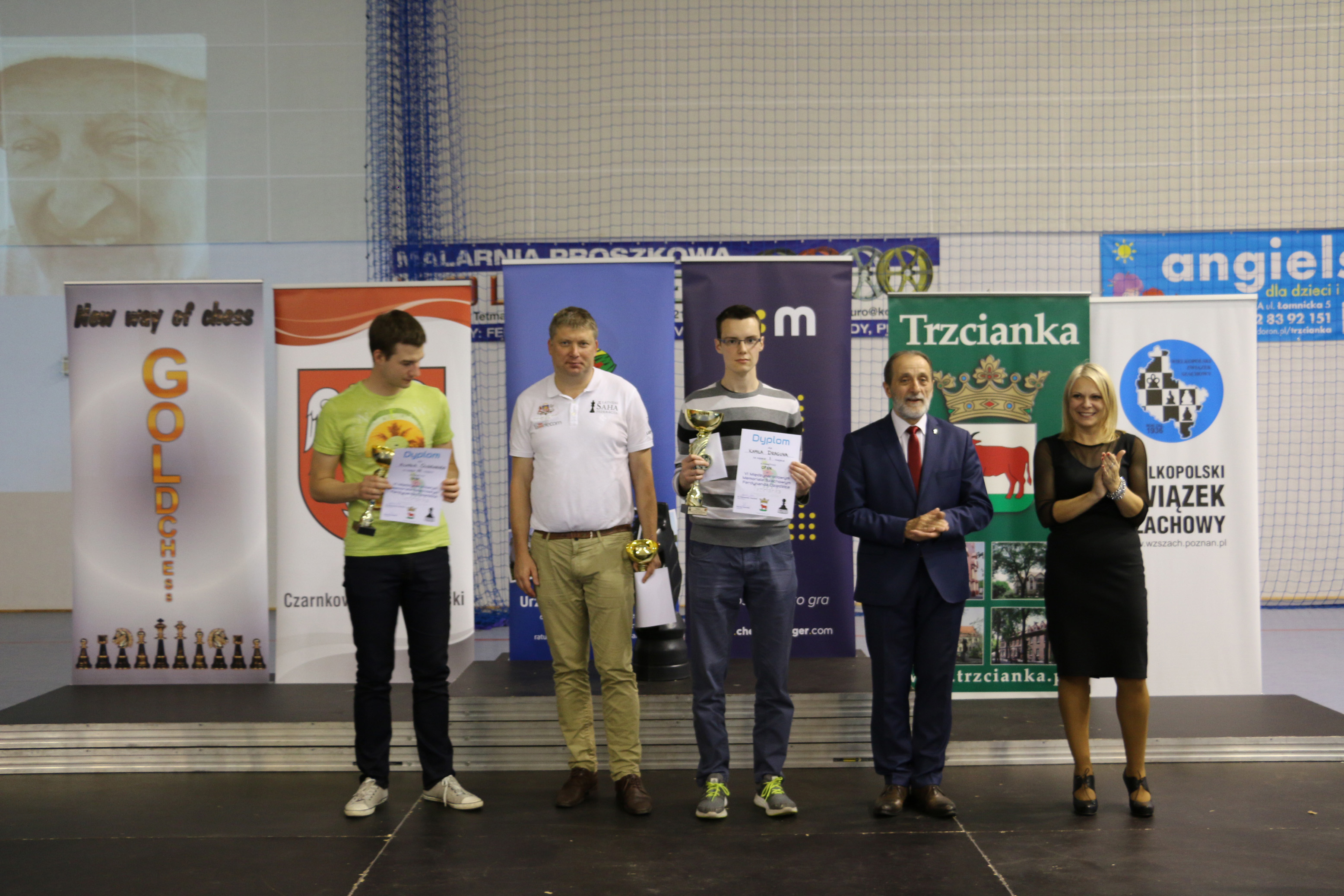 We were supposed to have two contests in Trzcianka. First one, brilliancy prize of 1000 PLN, and second Goldchess contest 1500 PLN for the winner. It turned out poorly.

The time for the games was 10 minues + 5 seconds increment per move. This quick time control caused nobody to write down the moves on the scoresheet. Hence, no game was submitted for the contest.
It was a good thing that the same day Goldchess brilliancy contest was organized at the A. Kubaszewski Memorial in Choszczno, Poland. There, many beautiful games were submitted. Trzcianka's calamity was duly compensated :)

However, the Goldchess tournament was scheduled for 6.30 pm, too late. Everyone was rushing to their homes. Out of 6 potential contestants, 3 had to leave early, including GM Krasenkow. Too bad, as he was likely to solve the problem and earn 1500 PLN on it.
As a result, to the tournament I organized, 3 young people signed up, among them a 2300 player. The young players, however, did not beat the CEEC. Only for one reason. None of them was able to find 1.Qh4.
In Trzcianka, due to the presence of Alexei Shirov, we prepared a special problem based on the game Shirov-Radjabov, 2004; the task was ending with a checkmate on move 22. In the problem, we tried to maintain Shirov's dynamic style. How it turned out can be judged by everybody now.
You can now check out the game clicking on the 10th white's move. Let's take a look at the game. The knight on h5 is asking to be struck by the bishop to destroy the castled king's position. Undoubtedly, Shirov saw that continuation, but probably didn't go for it as he was playing Radjabov. It was too risky. Against CEEC we can safely take this risk. CEEC is, after all, not Radjabov. :)
10.Ng5 h6, here CEEC may not enter the line, by going Nf6. But the program is not afraid of accepting the sacrifice.

11.Bh5 gh5
12.Qh5 hg5 we sacrificed a piece, black is taking the knight.
13.Bg5 f5, black defends actively, counterattacking. Let's make those moves on the considered game. Here is the position which stopped the young players. Nobody was able to find the strongest move.
14.Qh4, after which black plays
14...Re8, (the young players were playing 14.f4, which leads to the win on move 20, but not a checkmate!).

14.Qh4, intruded move, is sexy for two reasons: it deflects the rook, the active defender of the important line f, practically eliminating it from further play. Interesting. If we reverted the order, / next is g4/ and played g4 right away, CEEC plays Rf7.
15.g4 – to force black to take the pawn and opening the f file for the white rook.

15...fg4
16.f4 ef4
17.Rf4 Bc3 we sacrifice another piece,
18.Raf1 Bb4 eating pawns by the CEEC is admirable. The black king is practically not defended by any piece now. Even though he has extra two pieces!