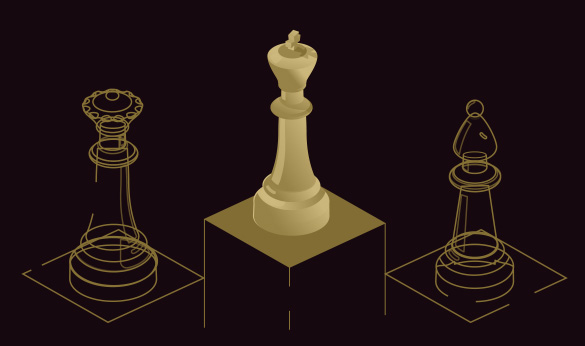 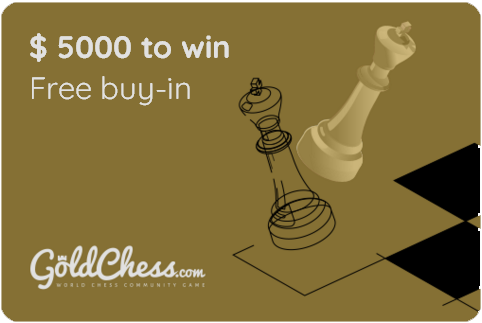 The relativity of chess, winning losing
In Goldchess we take chess seriously. But to the games themselves more playfully, because we recognise that sometimes the defending position of our educational computer will play weaker, so that we can win, and at the same time there is a downside, because the game is not so-called "rigid", i.e. without mistake. But this is not the end of the world, because the same thing happens in tournament games and that includes top chess players. We have examples and evidence of this from tournaments where the best play and also from world championship matches. All it takes is to take a winning game back a dozen moves, change a move and it can turn from a win into a loss. And this is what we do in Goldchess. Using examples of losing games of great champions, we show in Goldchess how they could have been won.
Our highlights - Chess tournaments of the new generation
Excitement, satisfaction, prestige and prizes!

The Immortal set of Goldchess

These games should be familiar to every chess player. Next to Andersen's immortal game, this is the most beautiful set in the heritage and history of chess. From the 'ugly duckling', the weak Caruana-Ding Liren game from the 2022 Candidates Tournament, lost in addition by white, chess diamonds were born. A show of chess virtuosity. Created by Goldchess and our player. We create and inspire others.  This set of games is the foundation of chess thought and a model for generations of chess players. Caruana-Ding Liren in the Goldchess version. A powerful serving of immortal beauty.
To have Caruana play like that in this game...  The parties are in the folder - The most beautiful Goldchess games

Goldchess - skill tester
Goldchess is for chess players with ratings plus capable and intelligent amateurs.
In Goldchess you play from the given position. To win it with our educational computer you have to find the correct game plan and concept. If you don't find it and you don't win, it means that you don't know how to play chess, no matter if you are an amateur or a grandmaster. Check it out. Goldchess will reveal the truth to you.

Learn and improve your level. We will show you how to turn a loss into a win, based on the Nepo-Carlsen 2021 match, the Tata Steel 2022 tournament and others.
Games
Comments 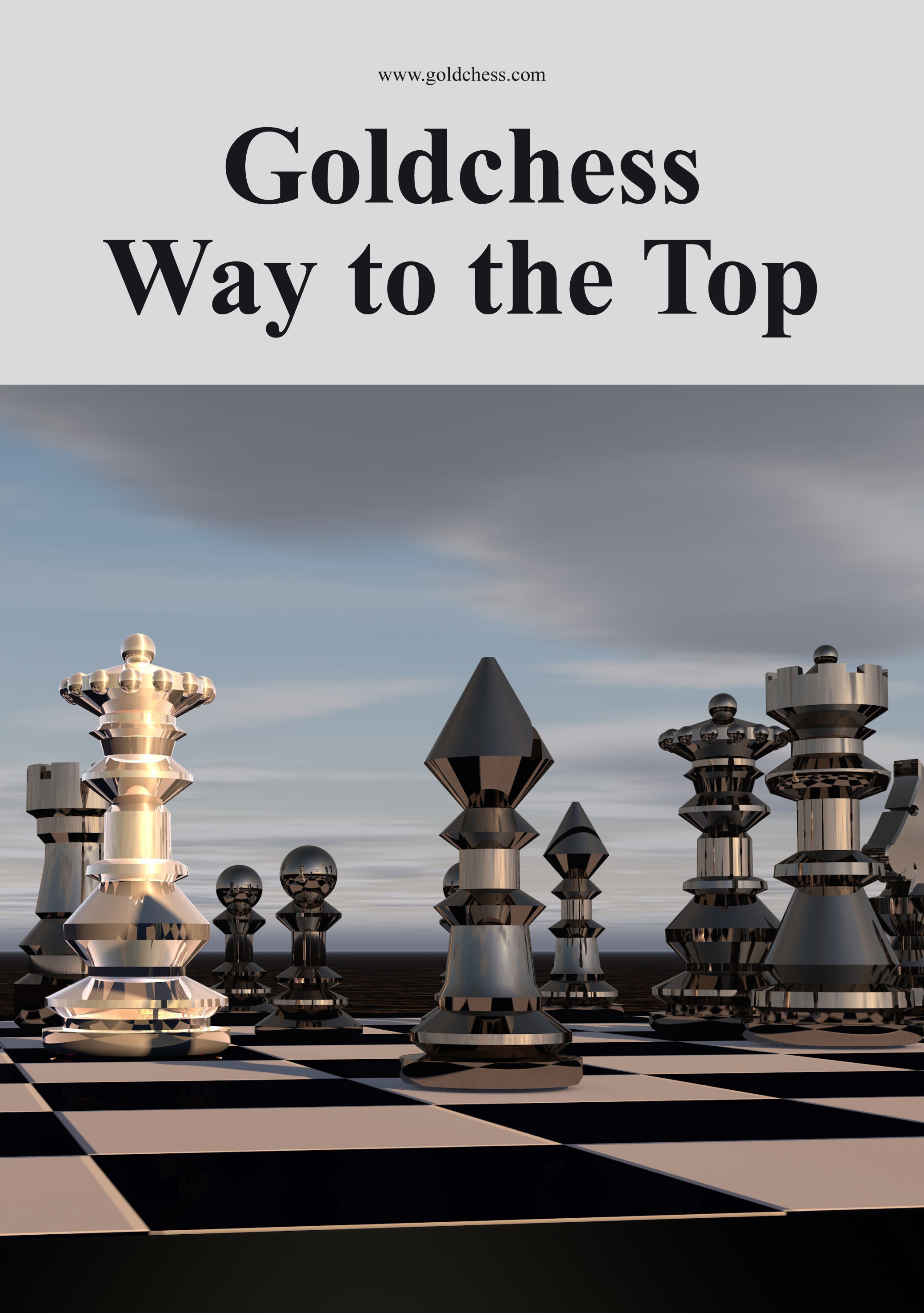 Buy now and learn the Goldchess style earlier than others!
Now in our e-shop!
Exciting Goldchess World... 2020 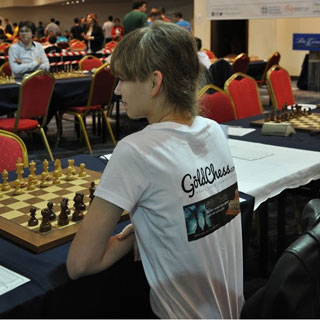 In our T-shirt, the current European Champion, Alicja Śliwicka.

I know that I know nothing
Dear chess players, in Goldchess (we exist for 10 years) we have good analysts. On our website there is a corner Chess Miracle (diagram on the main page) in which we select from various...
Goldchess – a new way of chess
Goldchess is the biggest and most important chess project of the 21st century.We are creating a new chapter in the history, development and popularization of chess.Our online chess tournaments...
Chess players' dreams
Every chess player dream. For example, middle-class grandmasters, who rank out of the top 100 chess players, dream of playing against Carlsen. The minors would like to at least play in the same...
view all
With Goldchess into the 22nd century
How do traditional tournaments differ from Goldchess tournaments? Two comments at the outset. These tournaments do not conflict with each other, they are all chess, so in the same family,...
Goldchess - on the threshold of the XXII century
Goldchess has unlimited possibilities. Due to the fact that everyone plays with us from the given position with one and the same opponent, our educational computer, an unlimited number of...
Goldchess - chess for the masses
(For more than 50 million chess players registered on chess portals worldwide) In the current FIDE system chess is poor, underinvested and dependent on sponsors. The most important prizes...
view all
Goldchess is a unique experience.
Goldchess is a unique experience. Each task presents you with a new challenge, encouraging the development of your imagination. It is very exciting to be able to find the right answer in a short time and thus be able to beat the other participants. Without a doubt it catches you, it motivates you. I invite all chess lovers to visit the website, download the CEEC program and start enjoying this attractive practice.
Make Goldchess part of your life!
GM Yuri Gonzalez Vidal
YuriGonzalez
Goldchess is an oasis of human mind in computer assisted chess world.
While all people began to play like robots, this program became a drop of human thinking, which could be drunk endlessly. Thanks to the creators of the goldchess. Thanks for the fair game and for unforgettable emotions. FM Armenak Yeghiazaryan
Armenak
Write a new review view all 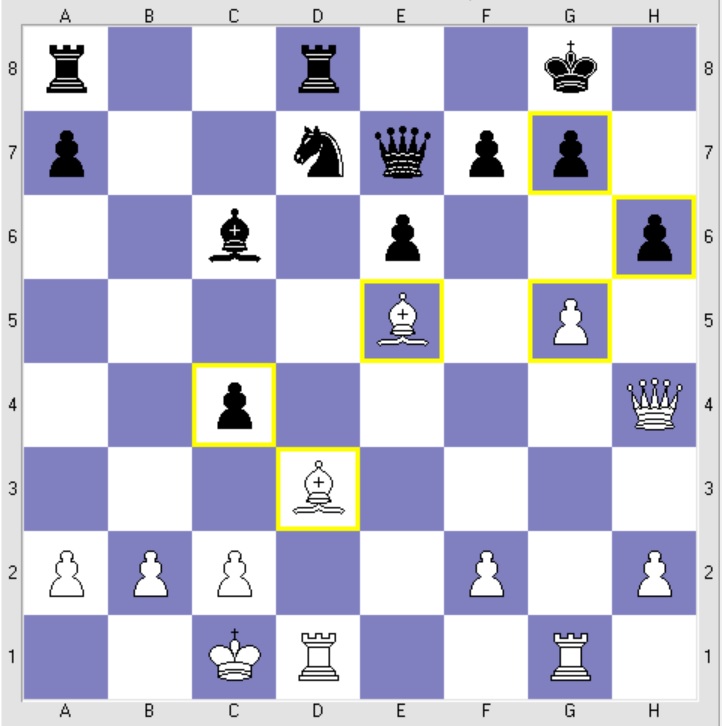 Check if you can play chess by playing against CEEC.
Play

Sales of entry fee for Millionaire tournament 10% off

New generation tournaments, from the given position, against an educational computer. You play against him at his 5th level (out of 23).

1. Download - our chess program (CEEC), install and activate to full version. (in -codes- you have instructions).  You're ready to play (in diagrams).
2. Register

In Play-Option you can change the pieces and colour of the chessboard's fields. Do it and be satisfied.
We wish you successes
Gteam 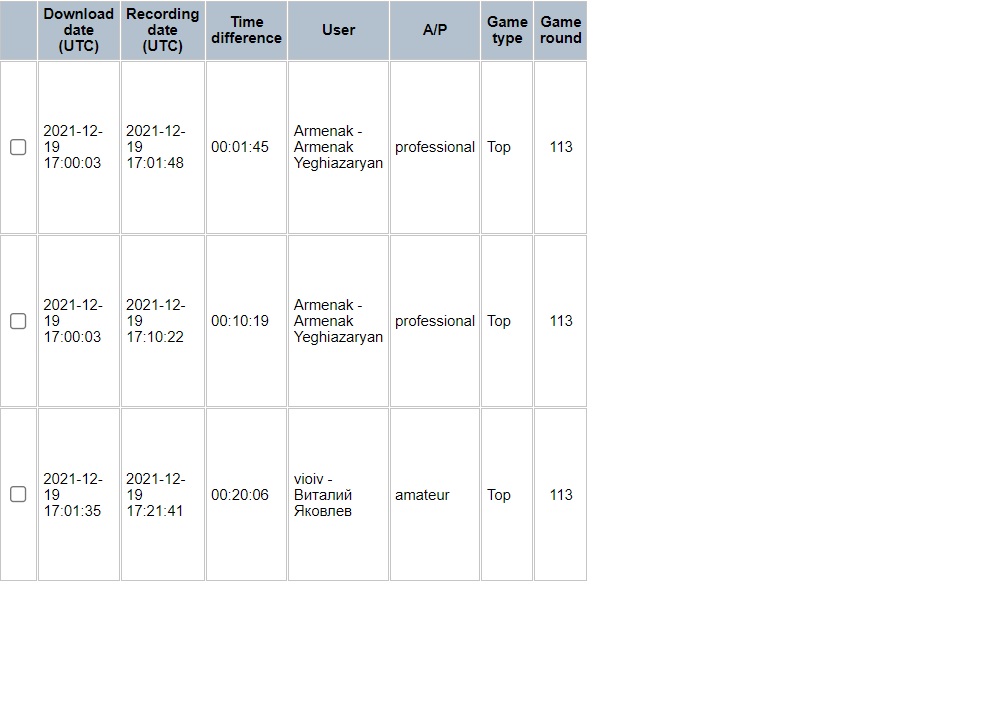 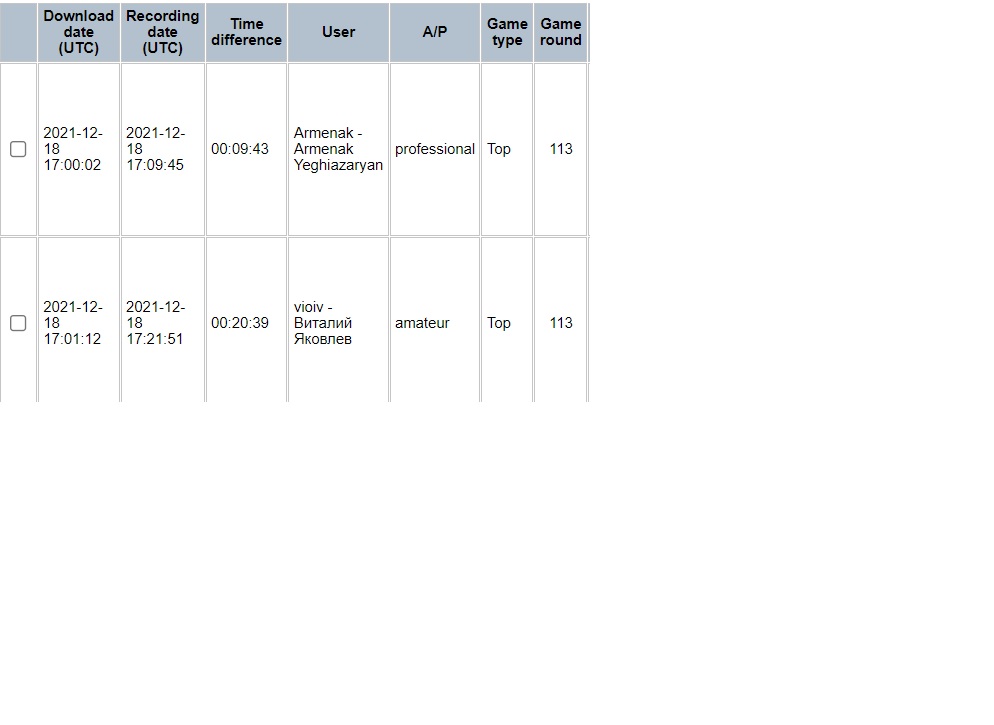 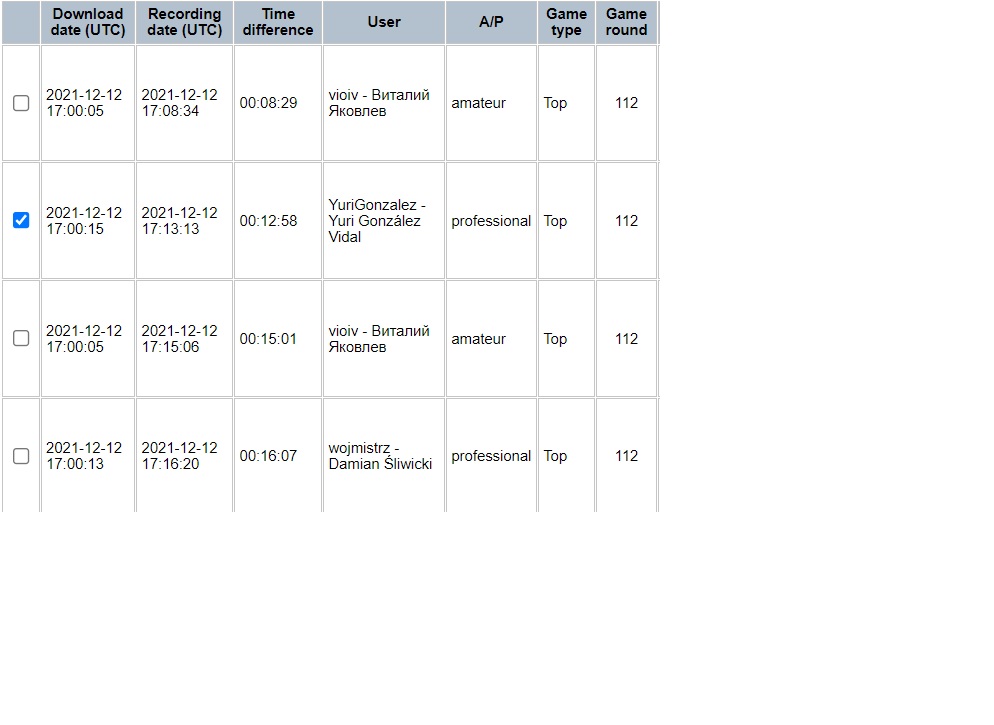 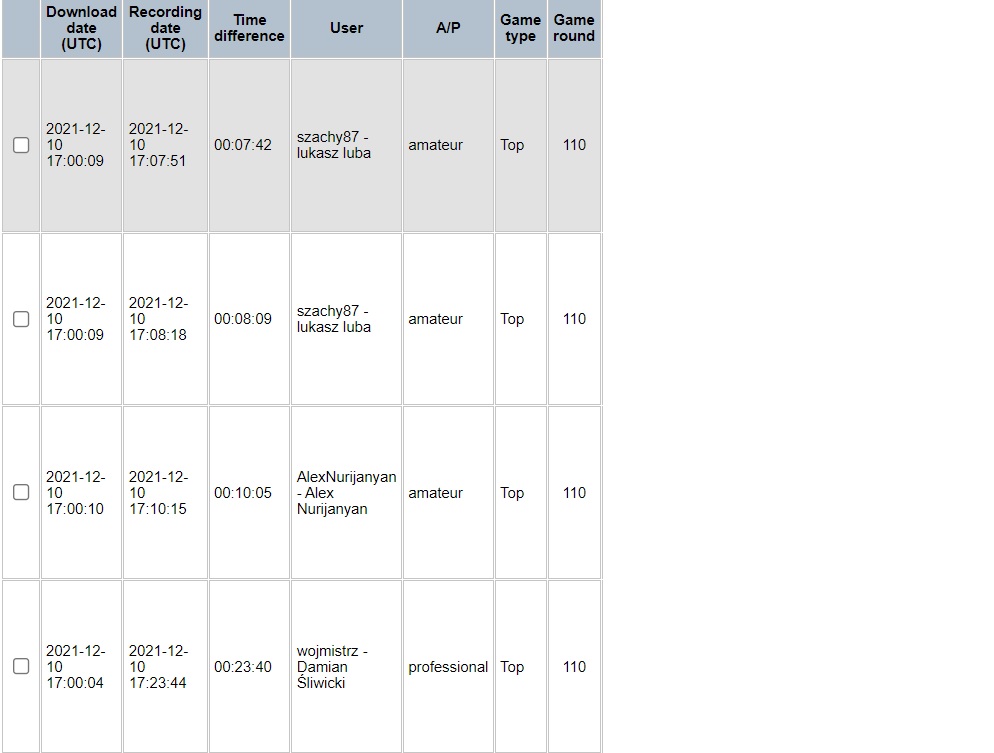 Login to write a review